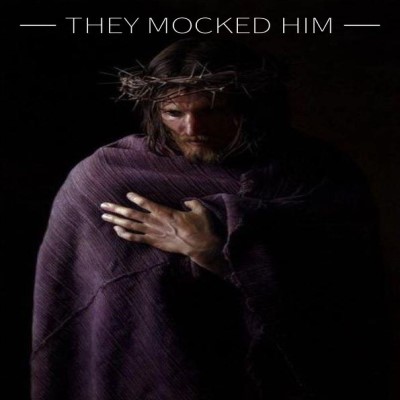 Today I would like to share with you Matthew 27:27-31, “Then the soldiers of the governor took Jesus into the Praetorium and gathered the whole garrison around Him. And they stripped Him and put a scarlet robe on Him. When they had twisted a crown of thorns, they put it on His head, and a reed in His right hand. And they bowed the knee before Him and mocked Him, saying, ‘Hail, King of the Jews!’ Then they spat on Him, and took the reed and struck Him on the head. And when they had mocked Him, they took the robe off Him, put His own clothes on Him, and led Him away to be crucified.” Here we have Roman soldiers mocking Jesus, but we have to look at the small details. The soldiers didn’t know Jesus, they had not been around Jesus, and yet they are mocking Him. They put a crown-of-thorns on Him, they place a royal robe on Him, they bow their need to Him, they hit Him and spit on Him. Yet they do not know Him, it is the demonic spirits inside these men who are acting out in these men. Psalm 22, is David prophesying about the crucifixion of Jesus. Notice versus 12 and 13, “Many bulls have surrounded Me; Strong bulls of Bashan have encircled Me. They gape at Me with their mouths, like a raging and roaring lion.” Notice how David says bulls of Bashan and how these bulls are raging and roaring like lions. The Bible, in Ezekiel, describes cherubim as having 4 faces, man, eagle, lion, and ox. Lucifer is a fallen cherub, What David is seeing here are fallen cherubim mocking Jesus on the cross. Just like the Roman soldiers who didn’t know Jesus mocked Him in such a demonic way, the demonic realm reacting to the trial and crucifixion of Jesus Christ.

A New Way to Shop & Give

AmazonSmile is a simple and automatic way for you to support The Anchor Ocenaside every time you shop, at no cost to you.

When you shop at smile.amazon.com, you’ll find the exact same low prices, vast selection and convenient shopping experience as Amazon.com, with the added bonus that Amazon will donate a portion of the purchase price when you select to donate to The Anchor (CBMC Inc) .

Update Personal Details
Your ticket for

Use the secure form below: